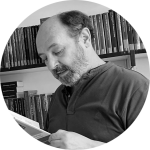 Submit to the instant they're caught. An extraordinarily quiet place which in turn produces stillness, accuracy. There the gaze of the character meets the gaze of the painter. A time and a place -that sudden instant, that exact place- that possess something very elementary and very complex at the same time; something that is hidden and hidden from us: the spirit of the invisible. That's the real place where the least action captured by Macaya happens. Their art is invisible and aerial, until it seems only a sum of stains, as happens with the bullfighters in their paintings: they seem to be warriors, they seem to be beings sketched in their artifice, they seem to be something else that they insinuate, that they do not show.

Behind every painting there is, in a way, a hidden memory, typical of the painter, which is metaphorized in what is painted. It is a memory that only he knows, or does not even know, because perhaps it is a reminiscence, a past taste, an unexpectedly forgotten experience that happens. It is an invisible memory, like the spirit that brings it to the present, to the eyes of the spectator materialized in that other thing that is seen. Hence the symbolic power of painting, of all painting. Let us not forget this force, which is the one that reaches directly, uniquely and unequivocally the one who contemplates the painting, because in this symbolic charge the invisible is manifested in the visible. At that moment what belonged to Macaya, what was underlying his intention, becomes the property of the observer. The painter's private feeling, his obsession, becomes everyone's heritage, our clarity.

From somewhere private in Macaya, very deep, comes this innocence that is in his painting. He comes like lightning to the pupil of one who watches his work. An innocence that speaks the language of the immediacy between the gaze, the dog, the still life of garlic, the bullfighter (the essence of the bullfighter) and the spectator. An innocence that we do not know how to decipher, when looking at these paintings, but that we can only understand through the acceptance of naivety as a premise, as we understand the enormous, brutal, powerful innocent beauty of a painting like that of the young man who is huddled or jumping on the waves.

And also from that innocence, from that invisible spirit that watches over everything, we manage to understand the funds on which men and dogs pose and things. As in the great master Caravaggio, the pictorial genius that grows inexhaustibly - I think of his extraordinary bodegón Cesta de frutas, for example, bodegón very different from those of Macaya and yet familiar, pure painting because it lacks concrete light and is nowhere to be found, and yet we understand it -, Macaya's backgrounds, apparently made not to be looked at, are backgrounds that contribute to the stillness that runs through his painting; they are very elaborate flat backgrounds, non-existent contexts, located in nothingness. But they are funds to understand, to situate this leap towards the visible. As in Morandi, whose palette is so reminiscent of Macaya's: the poor, the lacking, the fragile take on a transcendent weight, despite being nothing of the sort at all, neither poor, neither lacking nor fragile, for there is richness, richness of matter, of mixed nuances, of new colours, of gesture, of the spell of the portrait. That's why Macaya is also a mysterious Ramon Gaya, more emphatic, more labyrinthine. That's why it's a static, still, inexpressive Velázquez. That's why it's a Bacon without hatred or torment. That's why it's a Goya without boredom or ghosts.

In Macaya what is painted, the object of the painting, possesses, treasures, boasts of the anonymous, of that which is deliberately chosen for having no importance, for exhibiting that absence of importance as the support of the immanence of its expression. Suddenly identities lack solidity: who is who in those men, in the dogs, in the fruits, all this done and unified in the same fictitious portrait, foreign presence but known to be, finally, the fictitious portrait of the same man, or dog, or thing without a name, common and extraordinary at the same time.

To these achievements and tributes discovered contributes the scarce narrativity, not to say the null narrativity, that Macaya puts in his paintings; his intense statism, that transmits stillness even in the few actions, movements, of his characters.

This is a way of looking at life that some artists may sometimes manage to understand. And that way of seeing the invisible passing of air through time brings with it a strange joy - for there is joy in Macaya, the joy of that naïve innocence. There's a joy of painting in these paintings. A joy that overflows in the trace of the brush, of the painting on the canvas or the support that it is. And it is a joy that immediately becomes an accomplice of the spectator in spite of the apparent result, sometimes, of something shady, somber, in some of his paintings. Others, on the other hand, are traces of a natural, vital joy that comforts those who decide to enter them. Perhaps because of this manifesto to come and go from the simple to the complex, in all his painting, we believe that there are many appearances in Macaya, a painter wrapped in an insurmountable distance, but they are appearances of a new caravaggesque: the epiphany of the invisible, which is there and makes way.

Ana Sánchez Limiñana2019-10-09T20:50:40+02:00
Page load link
We use cookies on our website to give you the most relevant experience by remembering your preferences and repeat visits. By clicking "Accept", you consent to the use of ALL the cookies.
Cookie settingsACCEPT
Manage consent

This website uses cookies to improve your experience while you navigate through the website. Out of these, the cookies that are categorized as necessary are stored on your browser as they are essential for the working of basic functionalities of the website. We also use third-party cookies that help us analyze and understand how you use this website. These cookies will be stored in your browser only with your consent. You also have the option to opt-out of these cookies. But opting out of some of these cookies may affect your browsing experience.
Necessary Always on
Necessary cookies are absolutely essential for the website to function properly. This category only includes cookies that ensures basic functionalities and security features of the website. These cookies do not store any personal information.
Non-necessary
Any cookies that may not be particularly necessary for the website to function and is used specifically to collect user personal data via analytics, ads, other embedded contents are termed as non-necessary cookies. It is mandatory to procure user consent prior to running these cookies on your website.
SAVE AND ACCEPT
This website uses cookies and third party services. Okay.
Go to Top